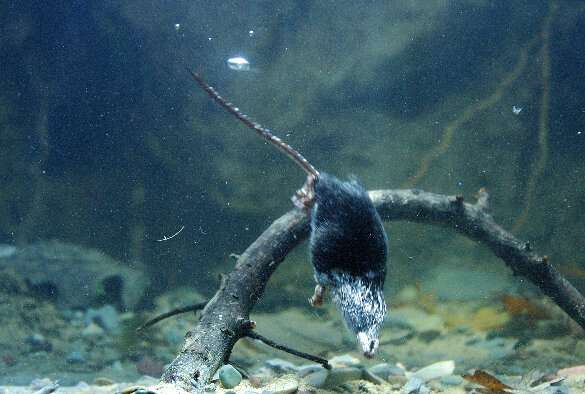 Up until now it’s largely been a mystery as to when some mammals evolved the ability to swim and dive for food.

Species within Eulipotyphla, which includes moles, shrews, hedgehogs, and solenodons, appear to be the least equipped for diving. Being the smallest mammalian divers on the planet, they rapidly lose heat and burn precious oxygen quickly while underwater. Yet, the Canadian water shrew, for example, needs to forage for double its body weight in food each day to survive, and going mere hours without food can be fatal.

UM Biologist Kevin Campbell and colleagues on an international research team studied the DNA of these mammals and using genetic sequencing methods, mapped the evolution of a single protein, called myoglobin, that stores oxygen in muscles.

This genetic signature in the protein structure indicated when myoglobin increased in abundance in the animals’ muscles and the researchers found that the ability to dive underwater in search of food evolved five distinct times, thrice in shrews and twice in moles.

The study, published in the online journal eLife, is the cumulation of 8 years of research and samples from over 71 different species.

“While we expected to see increases in the myoglobin surface charge in semi-aquatic shrews and moles, it was gratifying to see how well this approach worked every time we obtained new data from another semi-aquatic species that supported our predictions,” says Campbell.

Former UM post-doctoral fellow Kai Hai explains: “Evolutionary transitions have traditionally been deduced or inferred from the often subjective observation of morphological changes in bone structure in the fossil record. This study offers a new approach that not only is objective but should allow researchers to predict transitional forms in other mammalian groups that are expected in the fossil record and that will hopefully be discovered by future generations of paleontologists.”