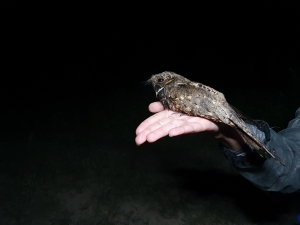 University of Manitoba researchers have published a paper that challenges the way we think about airspace. By equipping some migratory birds with a GPS backpack, the biologists provided new and crucial data to a burgeoning idea that argues airspace is a habitat and we need to conserve it, an idea that is gaining support in municipal governments across Canada, including most recently in Winnipeg.

PhD candidate Alicia Korpach led the study that looked at how the nocturnal eastern whip-poor-will, (Antrostomus vociferus) interacts with light pollution while making its 4,000-kilometer migration from Manitoba and Eastern Canada to Central America.

Most birds, even if they are diurnal by nature, migrate at night, and it has been well documented that artificial light from cities attract many of them. But the UM team wanted to see what effect light has on a nocturnal species such as the whip-poor-will, a brown bird slightly smaller than a robin that looks like a chunk of tree bark. 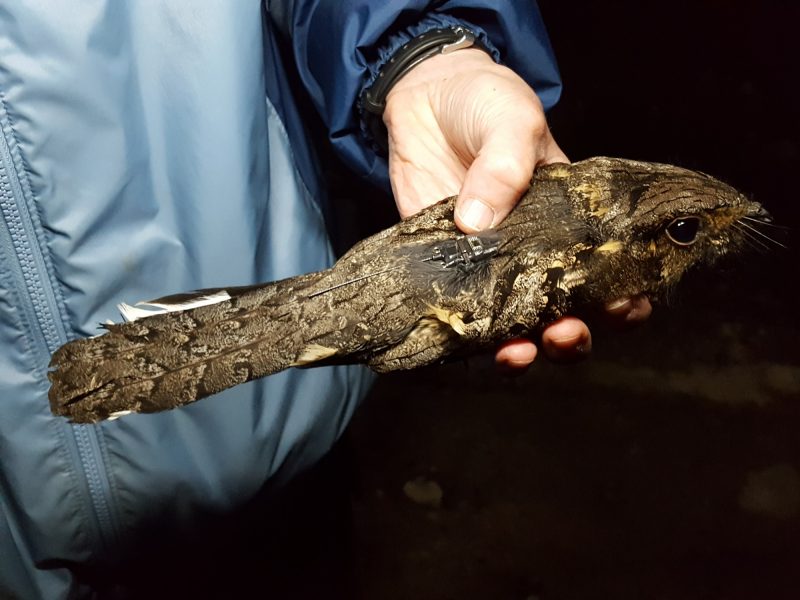 THE GPS SENSOR ATTACHED TO THE BIRD’S BACK LET THE TEAM SEE HOW THE BIRDS DIVERTED COURSE AWAY FROM LIGHT POLLUTION.

By attaching pinkie-tip sized GPS sensors to the birds they saw how individuals diverted course away from light pollution. As the researchers report in the journal Ecography, the birds prefer dark skies and follow meandering paths to stay in this habitat. The metabolic cost these diversions have is not yet known, but the stress is presumed to be unwelcomed.

“Aerial habitat needs to be considered along with terrestrial habitat,” Korpach says. “This is not really a concept that has been taken up, but it is starting to. We need to pay attention to what flying animals need in order migrate. I think making it more of a formal concept, more equivalent to how we look at the landscape and the oceans, would be integrative.”

Migrating birds, in short, need not only conserved land to rest, but also aerial highways for their long flights. Building connectivity routes on land is not a new idea. Animal bridges, like the one in Banff National Park, allow creatures to safely cross over highways to new grazing and hunting areas. There are also bridges designed for crabs and squirrel gliders, and tunnels under roads for many animals, including snakes in Narcisse, MB.

The researchers from UM’s Avian Behaviour and Conservation Laboratory, alongside UM’s Population Ecology and Evolutionary Genetics Group, contend that we need the same effort for birds, which bring us great benefits such as eating lot of insects.

“Whip-poor-will are such an iconic species of summer nights in Canada but are declining steeply,” says Kevin Fraser, associate professor of biological sciences at UM and Korpach’s supervisor. “They are currently listed as Threatened under our federal Species-at-Risk Act. Learning more about what they need to safely journey between Canada and their winter homes in the tropics can help us to better conserve them.”

What are some things we can do to help? The easiest, says Korpach, is to turn off lights, or dim them, especially during spring and fall migration, when large numbers of birds are moving through the area. It may be beneficial too to change the colour of the bulbs, as a prior UM study found different light wavelengths have varying effects on birds. But on a larger scale, cities can adopt bird-friendly light policies, such as the City of Winnipeg’s recent Lights Out Winnipeg Bird-friendly Policy.