Daniel Gussakovsky is the first winner of the James C. Jamieson Graduate Scholarship in Biochemistry

Department of Chemistry is delighted to announce that Daniel Gussakovsky, a graduate student in Sean McKenna’s group, is the first winner of the James C. Jamieson Graduate Scholarship in Biochemistry. 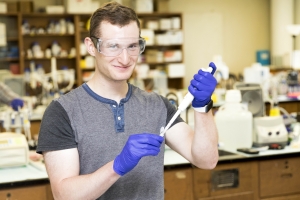 In honour of Dr. James C. Jamieson, an endowment fund has recently been established at the University of Manitoba with an initial gift of $100,000. The purpose of the fund is to reward the academic achievements of graduate students in the Faculty of Science pursuing studies in Biochemistry.

Dr. James Jamieson was born in Aberdeen, Scotland in 1940. (BSc: Heriot Watt University; PhD Aberdeen University). He joined the Chemistry Department in 1968. Dr. Jamieson helped create biochemistry courses which eventually led to the creation of an honours biochemistry program. Dr. Jamieson’s research focused on understanding the role of glycoproteins in an important metabolic phenomenon, the acute- phase response. He was, in conjunction with Drs. Bruce Chown and Jack Bowman, instrumental in designing the first plasma fractionation laboratory in Manitoba. Eventually this work became the basis of the pharmaceutical product called WinRho. Dr. Jamieson was not only a researcher and teacher, he also had an active role in administration. He served on University Senate, as speaker for the Executive, Chemistry Department Head (1986-1994) and was Dean of Science for a decade.