32 Years of cyclotron research at the University of Manitoba… 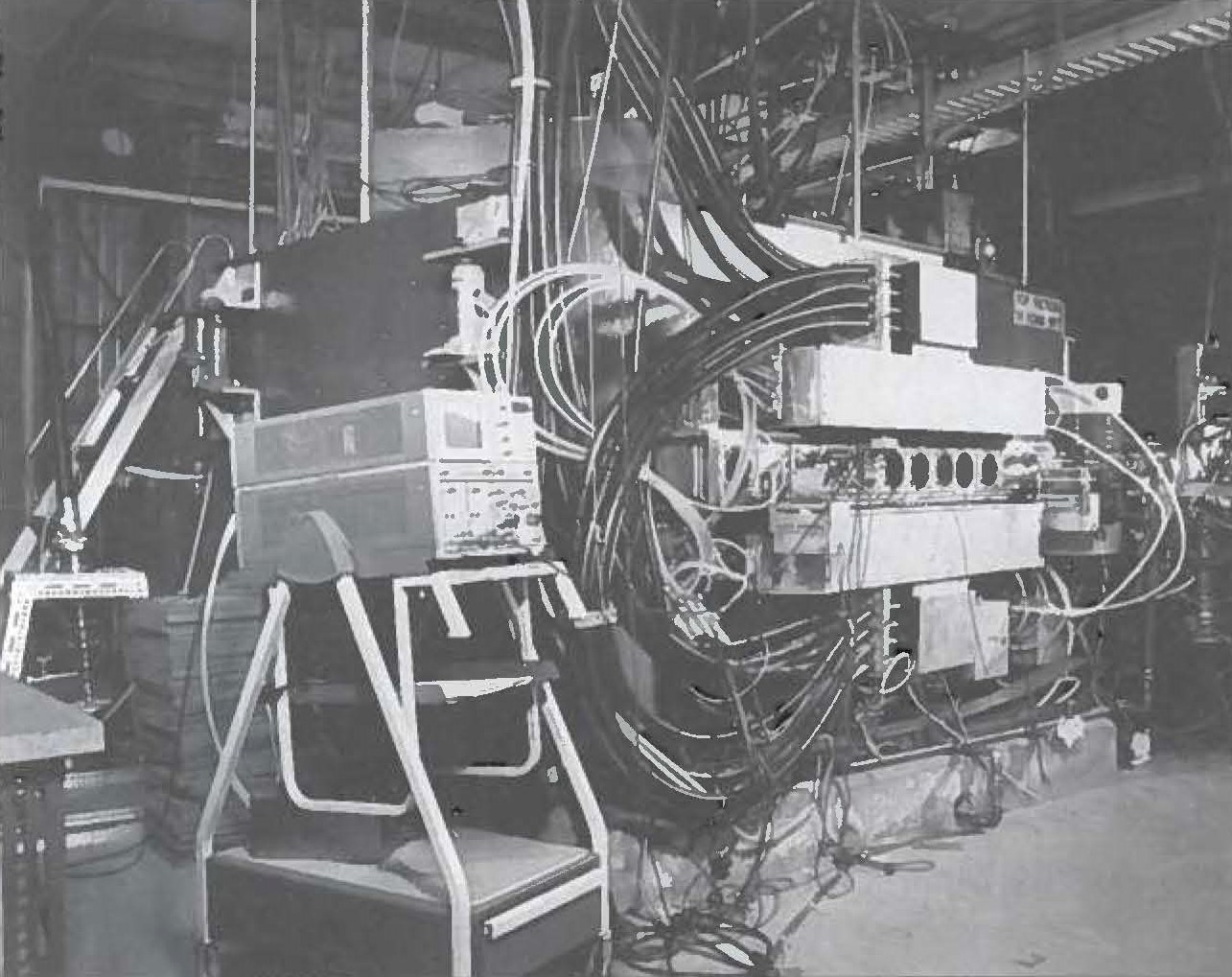 Dr. Kenneth G. Standing, the only faculty member on staff who had any experience with a cyclotron was brought onto the project to play an integral role in the establishment of the facility. Dr. Standing spent his sabbatical at Princeton University working with their cyclotron and through consultation with Whitmore, they put together a proposed cost of construction between $150 000 to $200 000, which was significantly higher than their initial planned cost of $50 000. Following the 1957 proposal by Dr. Whitmore, a grant application was filed to construct a 50 MeV spiral ridge cyclotron, with its acceptance in 1959 and final approval in 1960. The construction of the new cyclotron was underway in 1959 under the parking lot (now parking lot A) adjacent to the new Physics Building. Primary funding of $400 000 from AECB providing $70 000 a year installments and the Province of Manitoba agreed to absorb the remaining costs, bringing up the total cost of construction to $250 000. After 1976, funding for the research facility was provided by NSERC.

Dr. Standing returned from leave in 1960 and began to assist with on-site supervision of the research laboratory’s construction and hired two accelerator engineers, Joseph Burgerjon (1960-66) and Francis Konopasek (1960-1989). Throughout the design process and consultations between Drs. Standing and Whitmore, it was determined that they required a sector-focused machine. This was required as the intention of the machine was to accelerate protons to energies of 22 to 48 MeV at bean currents of ~1μA.

During the regular running of the machine, negatively charged hydrogen ions are accelerated until their path in the cyclotron reaches a thin foil (stripper foil) that removes the electrons from the ions. The resulting positively charged ions (i.e. protons) are then deflected out of the machine by the cyclotron’s magnetic field to an external switching magnet… into the experimental areas. The energy of the protons extracted from the cyclotron was changed by adjusting the position of the stripper foil in the machine. This machine was not an exact copy of that at UCLA because they wanted to ensure that it was particular for the rf design and the magnetic field shaping.

The new cyclotron had four spiral-shaped dees, whereas more conventional cyclotrons have two semicircular dees with parallel edges. The spiral dees allowed the orbital motion of the protons in the cyclotron to remain isochronous with the fixed frequency accelerating voltage by taking account of the relativistic mass of the protons increasing with energy. The enormous cyclotron magnet, originating form a British Battleship, weighing in at a total of 36 tones, coils capable of producing a 3000A current, and a magnetic field of 26 000 gauss. Specific construction requirements were needed to be able to handle this type of magnetic field, with the large concrete walls required to be 7 ½ feet thick. Final touches and testing of the facility were occurring in 1964 by achieving a circulating internal beam with 0.3μA of anions at an energy of 50 MeV and the external beam established in April of 1965. 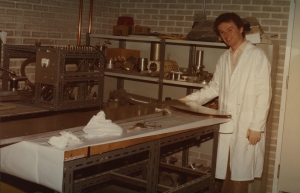 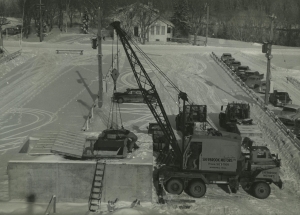 Construction in Parking lot A. 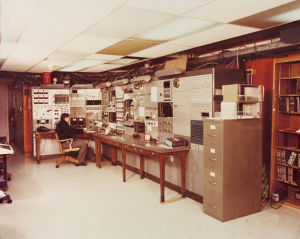 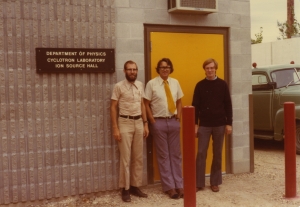 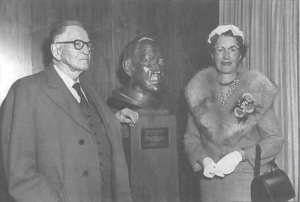 Frank & Lillian Allen at opening of Cyclotron Laboratory on October 14, 1965

October of 1965 was a monumental time for the Cyclotron Laboratory. A conference was held that month, titled “Medium Energy Nuclear Physics”, and on October 14, 1965, the Cyclotron officially opened with Dr. Frank Allen, the last surviving professor appointed in 1904, in attendance with his daughter, Lillian Allen, but sadly he passed away only weeks following the opening. Now that the facility was up and running, early experimental work consisted specifically of nuclear reaction experiments. Particularly nucleon-nucleon interactions (p-p bremsstrahlung and cross-section measurements), in beam gamma- and beta-ray spectroscopy and the production of active isotopes for nuclear spectroscopy group.

Dr. Standing was the director of the laboratory until 1967, when J.B. Reynolds stepped in as acting director for the remainder of the year. Standing returned in 1968 and subsequently held the position until 1974. That year, Dr. Jasper McKee arrived from England and assumed directorship of the facility until its closure in 1989. An important upgrade to the cyclotron facility occurred when a grant of $112 500 was received from provincial government’s Technical and Commercialization program for the winding and formation of quadrupole magnets.

The space underwent a $16.7 million major renovation to house the new facility, Manitoba Institute for Materials (MIMS), opening in 2016. MIMS is the home of a state-of-the-arts research and training facility specializing in materials and composites characterization. Today the facility owns and operates a range of analytical instruments and a sample preparation laboratory with instruments including FEI Talos F200X S/TEM, FEI Nova NanoSEM 450, FEI Quanta 650 FEG ESEM, and Kratoi Axis Ultra XPS.

Special thanks to Dr. Jim Birchall, Dr. Stefi Baum, and Dr. Robert Stamps for their assistance with this article.

Source:
Connor, R.D. (2004). The Expanding World of Physics at Manitoba: A Hundred Years of Progress. Winnipeg: University of Manitoba Press. 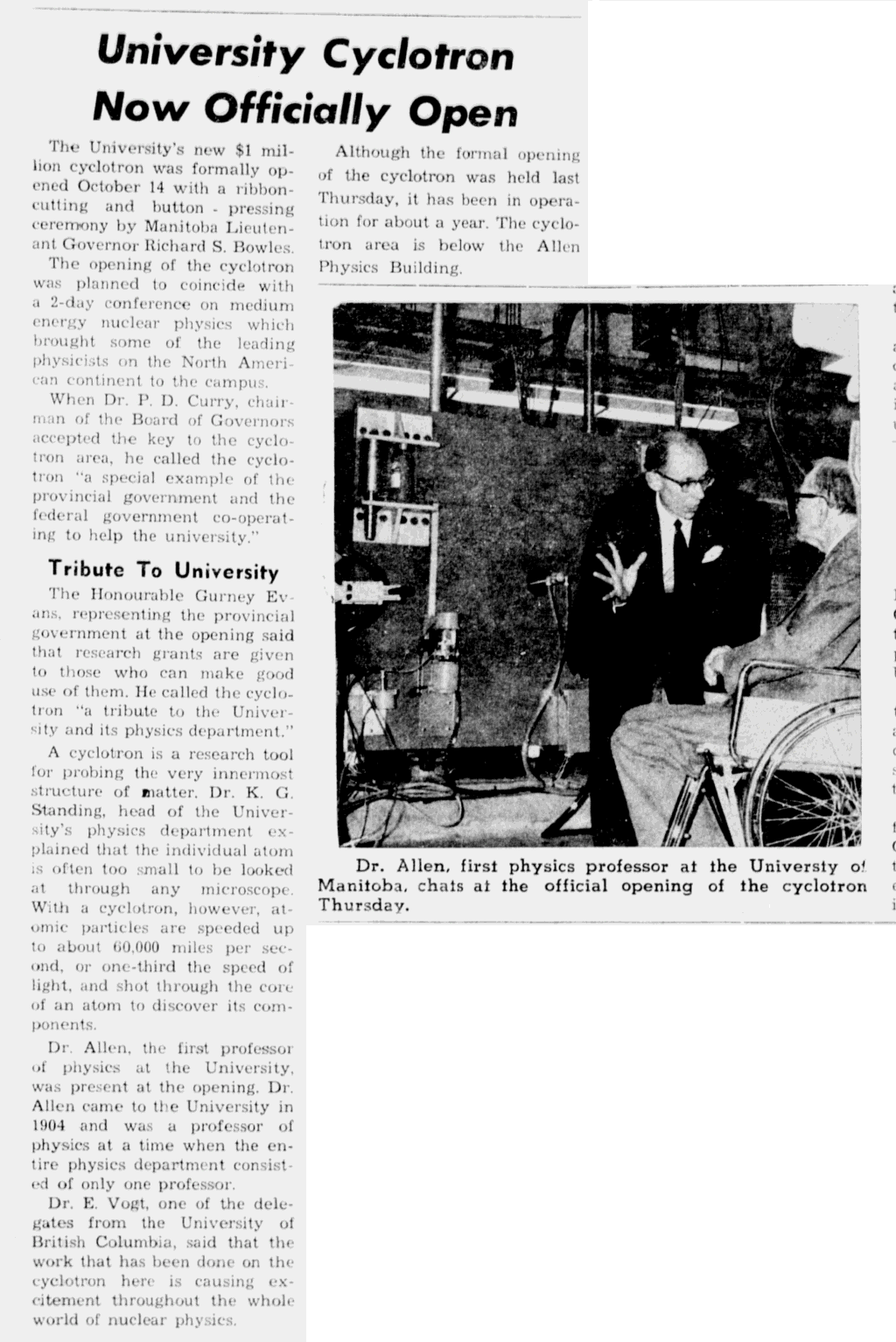 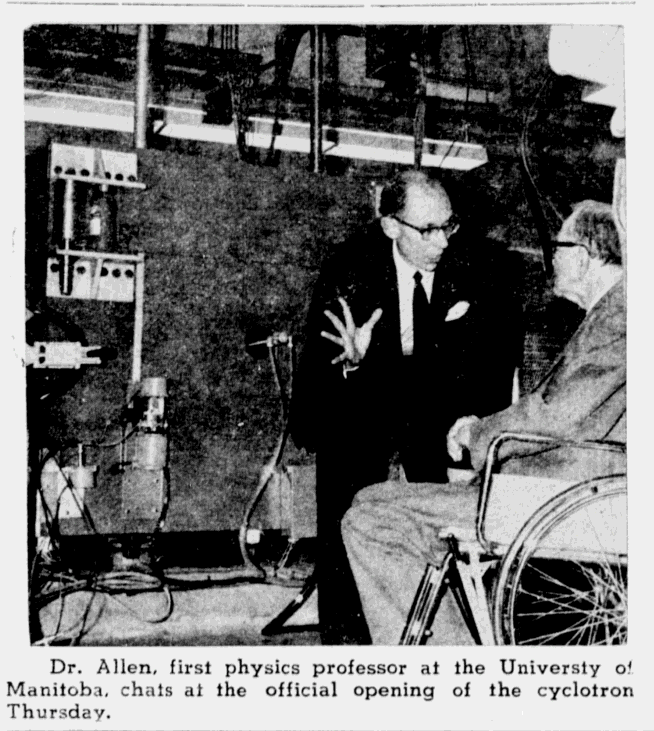 Dr. Allen, first physics professor at the University of Manitoba, chats at the official opening of the cyclotron Thursday.

The University’s new $1 million cyclotron was formally opened October 14 with a ribbon-cutting and button-pressing ceremony by Manitoba Lieutenant Governor Richard S. Bowles.
The opening of the cyclotron was planned to coincide with a 2-day conference on medium energy nuclear physics which brought some of the leading physicists on the North American continent to the campus.

When Dr. P.D. Curry, chairman of the Board of Governors accepted the key to the cyclotron area,, he called the cyclotron “a special example of the provincial government co-operating to help the university.”

The Honorable Gurney Evans, representing the provincial government at the opening said that research grants are given to those who can make good use of them. he called the cyclotron “a tribute to the University and its  physics department.”

A cyclotron is a research tool for probing the very innermost structure of matter. Dr. K.G. Standing, head of the University’s physics department explained that the individual atom is often too small to be looked at through any microscope. With a cyclotron, however, atomic particles are sped up to about 60,000 miles per second, or one-third the speed of light, and shot through the core of an atom to discover its components.

Dr. E. Vogt, one of the delegates from the University of British Columbia said that the work has been done on the cyclotron here is causing excitment throughout the whole world of nuclear physics.

Although the formal opening of the cyclotron was held last Thursday, it has been in operation for about a year. The cyclotron area is below the Allen Physics Building.