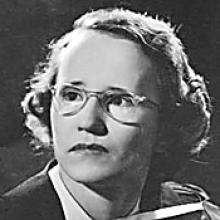 Obituary:
Doctor Roma Zenovea Hawirko passed away, at the age of 91, on March 4, 2011. She leaves behind her nice, Patricia Yaremovich, grandnieces Alexandra and Vanessa Giugliani of Vancouver, and her cousin, Susan Sadoway of Victoria. Roma was born in Winnipeg, MB, in 1919 and grew up with her parents, John and Anna, and her sister, Leonara (all predeceased). Her father valued higher education and encouraged both his daughters to pursue post secondary education which was extraordinary for females in the 1940s.. Roma graduated with a Bachelors of Science from the University of Manitoba (1941) and later achieved her Masters (1949) and PhD (1951) in Bacteriology from McGill University, under the tutorship of Professor E.G.D. Murray. Her research has been published and cited in many papers and journals. During her tenure as a professor at the University of Manitoba, Roma guided her students to excellence and exploration and contributed to her community through participation on the board of the Canadian Citizenship Federation and as President of the Altrusa Club of Winnipeg. She was also the chair and founding member of the Language Bank of Winnipeg, a volunteer interpreter’s service set up for new and potential Canadian citizens. Roma has a passion for travel and explored many areas around the world – the crater of Mount Etna in Sicily, to the Ellora caves of India, from the shores of Norway to North Cape and the Arctic Circle and many places in between. She was drawn to the arts of the places she visited and enjoyed sharing her travel and life experiences through creative writing. When Roma retired she moved to Victoria and kept active with additional travels, walking and book clubs, hosting dinner parties and enjoyed local theatre. She was fiercely independent, lived life on her own terms and was greateful for the interesting life that came her way. In 2009, Roma established an endowment fund at the University of Manitoba that offers an annual scholarship to a graduate student in the area of microbiology. Roma’s legacy will love on through this scholarship fund and through the memories of those that were blessed to known her.

Abstract:
The sporulation of a high frequency sporogenic mutant of Clostridium botulinum was reduced to <30% in a medium containing 270 mM glucose. The repression was reversed from 30 to >80% sporulation by the addition of 10^-5 or 10^-4 M cyclic 3′,5′-adenosine monophosphate (cAMP) or monobutyryl cyclic AMP (B-cAMP). No difference was observed in amount of growth with the the addition of either the cAMP or B-cAMP. Glucose consumption was enhanced by the addition of either the cyclic nucleotides and corresponding changes in pH were observed. The catabolite repression by glucose was reversed by ATP or ADP. Except for GTP, guanine nucleotides were not effective. The intracellular cyclic AMP levels were high in vegetative, sporulating and derepressed cells, but low in glucose-repressed cells. The findings suggest that the sporulation of the anaerobe was sensitive to catabolite repression.

Roma Zenovea Hawirko has established a fund at the University of Manitoba which will be used to offer the Roma Zenovea Hawirko Graduate Scholarship, which is intended to encourage and stimulate graduate student interest in innovation research activity in the area of microbiology.