Explosion at the University

January 1939
Home>explosion at the university january 1939

Two men, a carpenter and his helper, narrowly escaped being crushed by falling debris, and damage estimated at approximately $10,000 was done to the third and fourth floors of the new science building of the University of Manitoba, when a terrific explosion rocked the $700,000 premises at 8:20 a.m., Thursday.

It was too early for classes to have commenced, otherwise casualties would certainly have been heavy, as walls caved in, ceilings fell and windows were shattered. As it was, no students were injured.

The two victims of the blast were Bill McColl, 54, of 503 Rosedale avenue, a carpenter, and William Thomas, 25, 513 Rathgar avenue, his helper, who was hurled to the floor and cut, bruised and slightly burned, a few seconds after they had walked into the botany laboratory, where the explosion occurred.

Half stunned, and suffering from their cuts and burns, the pair managed to stagger downstairs to the first floor where they were given first aid treatment by S. Shelldrake, caretaker, and Mrs. Mary McHattie, a cleaner, the only other persons in the building at the time. Then they were hurried to Victoria hospital, where their condition is fairly good.

First estimates placed the loss at about $50,000, but this was reduced following investigation by members of the board of governors and officials of the department of public works. No structural damage to the building had occurred they found. While several desks were buried beneath debris and windows of the library were shattered and chairs overturned, no records were destroyed, it was intimated.

“I thought the world has come to an end – it was so awful,” Mrs. McHattie told the Free press, in describing the terrific explosion, which shook the building from top to bottom, tore walls and ceilings apart and smashed hundreds of panes of glass. Mrs. Hattie was on the main floor at the time, and Mr. Shelldrake on the second. Both escaped uninjured.

The explosion, it is believed, originated through a leak in the propane gas system, which is operated by the University itself. This gas is used in burners throughout the science building and in chemistry and botany experiments.
It is because the university is situated so far from the city that its own gas generating system was installed. Otherwise, it is understood, Winnipeg Electric gas would have been used in the various laboratories.

“Thank heaven the explosion didn’t happen an hour or so later,” remarked one of the university officials, as he surveyed the wreckage. “Otherwise no one know just how many might have been killed or injured.”

And a glance into the botany laboratory proved his supposition correct. Following the blast, flames gained a brief hold on a portion of the wall and some desks near where the supposed gas leak occurred, but were quickly extinguished. Desks including that used by the professor in charge were completely buried beneath wreckage, as walls caved in and ceilings fell.

Across the hall, in the library, further wreckage was in evidence, although none of the books were damaged. Windows by the hundred were shattered, and the floor was strewn with glass fragments and chunks of plaster. Professors, students and photographers clambered about the wreckage, until finally asked to leave by President Sidney Smith, in order that insurance adjusters might have a change of looking over the premises before the debris was disturbed.

Upstairs, on the fourth floor, a large classroom at the extreme east end of the building was also a mass of wreckage, although damage here did not compare with that on the third floor.

Exactly what caused the explosion is not definitely known. Some suggest that it was a result of spontaneous combustion, caused by the sudden opening of a door in the gas-filled room. Other believe that a spark from a pipe or cigarette, or the flame of a match ignited the gas which, throughout the night, might have seeped through a leak in the pipe or main. A gust of wind, blowing into a gas-filled room when a window was suddenly opened, is suggested as another reason for the disastrous blast.

Fred Rumble, building superintendent could not give no reason for the explosion and declined to discuss the disaster until after a throughout investigation had been made.

“No statement will be made until after further inquiry,” Sidney Smith, president of the University informed the press as he surveyed the wreaked structure. Shortly after the explosion occurred, Chief of Police A. Martin, of Fort Garry, was on the scene and made a thorough tour of the building. All classes in the science building were suspended.

They will be resumed Monday.

Confused wreckage and a shambles of masonry and furnishings are left in the new science building at the university’s Fort Garry site after a gas explosion on the third floor this morning. In (1) the ceiling in the third floor corridor bellies downward, cracked and broken. In (2) a gaping hole in an inside wall shows the wrecked library. In (3) blackened lab desks in a botany laboratory shows where a fire broke out after the blast. In (4) is the debris-filled third floor corridor.

Scores of University of Manitoba science students missed serious injury or death by a scant half-hour this morning when a ripping gas explosion made a shambles of the new science building at the Ford Gerry site, burning and injuring two workmen and causing serious damage to the modern $750,000 structure.

Sidney Smith, president of the university, said at 1:30 p.m. today that no structural damage had been caused and that the total damages would be about $10,000. The blast roared through the building and echoed over the quiet campus at 8:20 a.m. – when only two workmen and a janitor, S. Sheldrake, were in the building. Had it come at 9 am.m, students would have been filing into classes and would have been caught in the explosion. 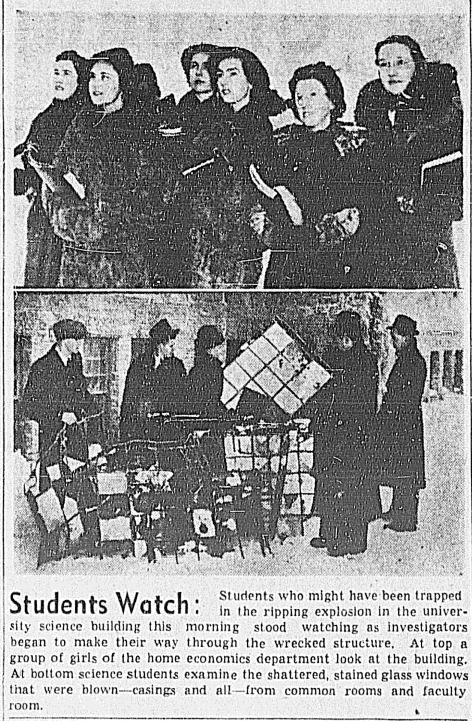 The escape of the workmen, William McCall, of 503 Rosedale ave., and Wilfred L. Thomas, of 513 Rathgar ave., was miraculous.

They were caught on the third floor, in the midst of the blast, as propane gas, piped from storage tanks into the building for use in laboratory work , exploded with a roar that blew out windows, door frames, ripped great sections of inside wall and ceilings out and wrecked labs, library, common rooms and classrooms on the fourth floors of the building. The gas escaped in some manner as yet unknown from pipes.

The men were flung against crumbling walls, half-buried beneath falling plaster and debris but managed to free themselves.

Tongues of flame began to lick their way over upturned furniture in one of the wrecked laboratories. But they were extinguished before they take hold and cause a general conflagration.

As the roar of the explosion shattered the quiet morning on the still campus, the two men, faces and hands burned, clothes torn and bodies bruised and cut, staggered down three flights of stairs to meet the building janitor, Sheldrake, who was in the basement at the time of the blast.

One, Thomas even managed to get to a telephone and call the switchboard operator in the administration building.

“There’s been an explosion,” he gasped into the telephone. “We’re burned … we’re burned. Get someone over here quickly.”

The operator telephoned for an ambulance, the Fort Garry police and Dr. A.W. Hogg. The men were given first aid and then taken to Victoria hospital, where their condition at noon today was fairly good.

Actual cause of the explosion or an accurate estimate of damage could not be made early this afternoon. It was believed there was a leak somewhere in the pipes that lead gas into the building for the use in laboratories. The leads through the well-finished walls of the building must have filled with gas. The explosion took place just as the workmen reached the third floor lab. Whether it was set off by a spark or by combustion as they opened the door to a room filled with cold air was not known.

It ripped through the entire east half of the building. Windows on floors from fourth down to first were blown out. Castings and stained glass were found lying on the snow covered campus within a radius of 50 yards around the building. Door frames crashed out of the wall-casings, smashing as they were buried beneath rubble on the floors of the corridors.

Huge sections of wall were blown outward and halls were littered three feet deep with chunks of plaster, building stone and timber. The walls of the science library, on the third floor, were buckled and the well-furnished room was a shambles – windows blown out, books shrewn about, tables overturned and masonry piled over everything.

The west half of the building was comparatively undamaged, the explosion centering through floors on the east side. There was no evidence of explosion in the basement, but the blast ripped from the first to fourth floors, parallel with the eastern staircase. Outer walls and roof were not blown out .

The roaring blast was heard over the entire campus, followed by the tinkle of falling class and the crash of masonry. “It seemed to shake the building,” Mr. Sheldrake, janitor, told The Tribune. “I was in the basement and as I came running upstairs Thomas and McCall came down the east staircase to the ground floor.”

No Estimate of Loss

Groups of students, harred from the wrecked building, stood around outside talking and looking at the scattered glass and plaster. Classes in the science building were cancelled indefinitely and professors made hasty inventory of damage to lab equipment and classrooms.

“It will be days before we can get any full estimate,” F.W. Crawford, bursar for the university, told The Tribune as the investigation started. “I’d hate to try to guess what the damage is now.”

The building housed lecture rooms and laboratories for classes in botany, chemistry, physics, zoology, and geology. It was used by science students and some students from the home economics department.

None of the investigators would give an estimate of damages up to noon. “It would be impossible at this stage to attempt to estimate accurately,” Mr. Clubb said.