As a matter of fact, they do sweat the small stuff

MARCH 3, 2021 — A newly-funded particle physics experiment may be able to look into the structure of individual electrons—particles that have so far been indivisible.

A bold project to peer inside fundamental particles, called Measurement Of a Lepton Lepton Electroweak Reaction (MOLLER), is a Canada-led international effort involving collaborators from UW and Memorial University in Canada, but also from the USA, Germany, Italy, France and Mexico. 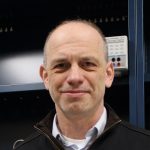 UM physicists Michael Gericke and Juliette Mammei, with co-investigator Wouter Deconinck, have received $2.3M for MOLLER from the Canada Foundations for Innovation (CFI). Their goal is measure the interaction properties between pairs of leptons (specifically electrons) down to separation distances of a zeptometer – which is roughly a million times smaller than the size of the smallest atomic nucleus – with unprecedented accuracy.

To do this, the team will build and operate a large array of ultrasensitive electron detectors at the most advanced electron beam facility of the world, the Continuous Electron Beam Accelerator Facility (CEBAF) at Jefferson Laboratory, Virginia (JLab). The instrument will send high energy electrons with a speed of 99.9999999 per cent of the speed of light towards stationary electrons then detect the resulting scattered particles, precisely measuring tiny variations in their properties that might be due to structure or interactions with other things. 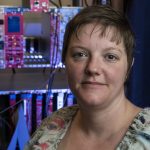 Gericke says MOLLER may be able to do things unheard of before now: “The electron is currently considered to be a so-called point or fundamental particle, which means that no one has ever observed it to have any excited states or spatial extent. But this is likely just a resolution problem, rather than a real property. There are now experimental signs that the electron may have structure. Whether the particle nature of things breaks down at some distance scale is an open question.”

He adds: “The acceleration of the beam particle ensures an approach between two electrons to within 10e-17 meters and the precision with which we look for the symmetry changes would allow us to resolve interactions with and within the electron to the 10e-21 meter level.”

Such a precision can be envisioned as a decimal point with 20 zeroes after it, and then a one. That’s very, very small—smaller than anything attempted before.

This begs the question of why it’s being done at all, and Gericke has a great answer that may mean better technology in your handheld devices or MRIs in hospitals.

“Simply put, the only thing that has ever produced any real advance in technology, including communication and medical devices, has been a better understanding of the structure of matter,” he explains. “Now, most of these advances in applications lag behind the discovery of the science by many decades, but that doesn’t change the fact that the knowledge has to exist before these technological advances could be made. For example, the physics needed for quantum computing was established when a new theory was needed to explain the structure of atoms in the early to mid-20th century – the rest is mostly engineering.”

He notes: “In the case of MOLLER, if one understands electrons better, one may be able to do more things with them.”

Gericke also points out that MOLLER will require a lot of new electronics and parts development and components that will need to withstand massive radiation blasts that aren’t currently available. The intellectual property generated from the electronics development as well as the practical knowledge on material properties and behavior under extreme conditions will likely benefit energy and space science, not to mention the software necessary to process the petabytes (1,000 terabytes) of data generated.

One of the MOLLER components is a high resolution detector that combines analog and digital processing in the same chip and could be used in medical research. MOLLER will involve the combined effort of engineers, technicians, and scientists, as well as many students, here in Manitoba, before everything is shipped to JLab.

Sakib Rahman, one of the PhD students working on the design of MOLLER, says: “It is exciting for us to be able to work together with the engineers at JLab and drive the design of the experiment from Manitoba. I even was able to go to Germany to test our MOLLER detector prototypes at the Mainz test beam facility.” 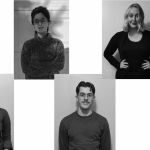 Although MOLLER is looking at extraordinarily tiny things, its implications extend to the very large—the universe itself. Astrophysicists have long been searching for dark matter, which has been theorized to account for much of the mass in the universe but has yet to be found. Gericke says it may be literally right under our noses, interacting with electrons.

Gericke says: “If particles of dark matter are very massive at the subatomic level and mass does not equal size, then their interaction distances will be very small. A new dark matter interaction would change the symmetry properties of the electron. Dark matter may be hidden at the zeptometer level, but this represents the edge of our present knowledge.”

One thing Gericke emphasizes it that every technological advance we make in the future depends on our understanding and knowledge of the fundamental process in nature.

“These types of experiments appear to be expensive, but the majority of money goes into training future scientists and developing novel technologies that we need to do these experiments and which usually migrate into everyday applications over time.”