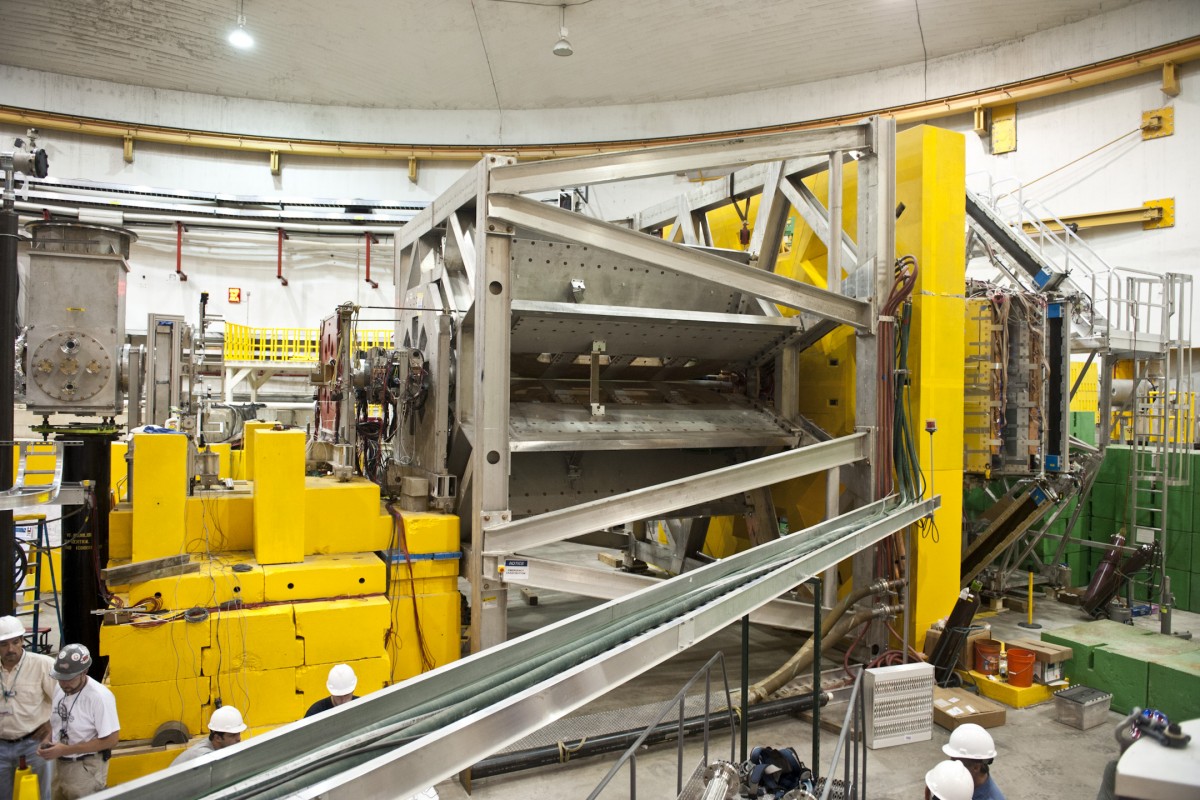 Home>news>um today the weak side of the proton

UM Today: The weak side of the proton

An international team, including several university of Manitoba researchers, have gained new insight into the most elusive of the four fundamental forces in nature, the weak force, through research they undertook as a member of the Q-weak collaboration. The experiment they carried out revealed one of the weak force’s secrets: the precise strength of its grip on the proton. They did this by measuring the proton’s weak charge to high precision, which they probed using the high quality polarized electron beam available at the Continuous Electron Beam Accelerator Facility, at the US Department of Energy’s Thomas Jefferson National Accelerator Facility. The result, published recently in Nature, significantly narrows the search for new particles that could influence the behavior of matter at very short distance scales (zeptometers).

While the weak force is difficult to observe directly, its influence can be felt in our everyday world. For example, it initiates the chain of reactions that power the sun; it provides a mechanism for radioactive decays that partially heat the Earth’s core, and which enable doctors to detect disease inside the body without surgery.

The proton’s weak charge is analogous to its more familiar electric charge, a measure of the influence the proton experiences from the electromagnetic force. These two interactions are closely related in the Standard Model of particle physics, a highly successful theory that describes the electromagnetic and weak forces as two different aspects of a single force that interacts with subatomic particles. Despite its success, the Standard Model has a number of shortcomings, such as the large number of parameters that are constrained only by experiment, or the absence of a clear explanation for the existence of dark matter. The weak charge of the proton is a quantity that is precisely predicted within the Standard Model and sensitive to small changes that could be induced by the some new physics processes that could explain or fix the current problems with the model.

“For example: Astrophysical data suggests that dark matter exists, but to determine whether it is real, you need particle physics to find the smoking gun – a new particle – which would require a high energy collider experiment. However, this new particle would necessarily come with new (probably very weak) interactions with regular matter, which are currently not described by the Standard Model. If this is the case, then a very high precision experiment of a quantity that is very sensitive to the corresponding new interaction would have to detect a change from the Standard Model predicted value and the weak charge of the proton is such a quantity,” said Michael Gericke, associate professor of physics, at the University of Manitoba. In addition, certain proposed new interactions may be visible through these precision observables, before the corresponding particles are detected at colliders, if their mass is too heavy to be observed at the current collider energies.

To measure the proton’s weak charge, an intense beam of electrons was directed onto a target containing cold liquid hydrogen, and the electrons scattered from this target were detected in a precise, custom-built measuring apparatus. The key to the Q-weak experiment is that the electrons in the beam were highly polarized – prepared prior to acceleration to be mostly “spinning” in one direction, parallel or anti-parallel to the beam direction. With the direction of polarization rapidly reversed in a controlled manner, the experimenters were able to latch onto the weak interaction’s unique property of parity (spatial inversion) violation, in order to isolate its tiny effects to high precision: a different scattering rate by about 2 parts in 10 million was measured for the two beam polarization states.

The proton’s weak charge was found to be QWp=0.0719±0.0045, which turns out to be in excellent agreement with predictions of the Standard Model, which takes into account all known subatomic particles and the forces that act on them. Because the proton’s weak charge is so precisely predicted in this model, the new Q-weak result provides insight into predictions of hitherto unobserved heavy particles, such as those that may be produced by the Large Hadron Collider (LHC) at CERN in Europe or future high energy particle accelerators. For example, the Q-weak result has set limits on the possible existence of leptoquarks, which are hypothetical particles that can reverse the identities of two broad classes of very different fundamental particles – turning quarks (the building blocks of nuclear matter) into leptons (electrons and their heavier counterparts) and vice versa.

The Q-weak experiment, initiated in 2001, represents the sustained effort of a large, international team of roughly 100 scientists from 20 institutions over nearly two decades. The UofM subatomic physics group is a founding member of the Q-weak collaboration, leader of the Canadian involvement, and one of the leading contributors to the construction, data production, and analysis efforts. Over the years, the UofM group involved a large number of students, postdocs, research associates as well as faculty members: Drs. Jim Birchall, Willie Falk (deceased), Michael Gericke, Juliette Mammei, Shelley Page, and Willem van Oers. This included several sabbatical leaves of faculty who were based at JLab during the experiment’s construction and data taking phases. More than $3M of support has been provided through the NSERC subatomic physics Project Grant program to the Canadian group (which also includes scientists from the University of Winnipeg, University of Northern BC, and TRIUMF). These funds were used to build equipment and to support student and postdoctoral researchers’ salaries and travel to carry out the measurements at Jefferson Laboratory. Technical and engineering support was provided by TRIUMF, facilitated by the UofM’s mebership in the TRIUMF universities consortium. The UofM / Canadian group’s primary contributions include the design and mapping of the large spectrometer magnet, the design and construction of the main electron detector package, contributions to the electron beam polarimetry Compton electron diamond strip detector and data analysis. Shelley Page is the Canadian PI and a co-spokesperson of the experiment. Michael Gericke, Juliette Mammei, Dr. Jie Pan (UofM Research Associate), and Dr. Peiqing Wang (UofM Staff) contributed heavily to the construction, running, and data analysis effort. Detector development work was carried out in Michael Gericke’s lab, funded by the Canada Foundation for Innovation.

The successful completion of the Q-Weak experiment is an important milestone in parity violating electroweak physics and sets the stage for a new measurement of the weak charge of the electron, at even higher precision – the MOLLER experiment – which is currently under development and in which the UofM subatomic physics group has again a strong position of leadership.

The experiment was funded by the United States Department of Energy, the National Science Foundation, the Natural Sciences and Engineering Research Council of Canada, and the Canadian Foundation for Innovation, with matching and in-kind contributions from a number of the collaborating institutions.