“Galileo is one of those larger than life heroes of our intellectual history,” says Astrophysicist and best-selling author, Mario Livio.

The Faculty of Science was treated to a virtual public lecture on October 9, 2020, with Mario Livio, on the topic of his new book, “Galileo and the Science Deniers.” The book explores the life of scientist Galileo Galilei, and the grim fate he met at the hands of the Catholic Church. It has received critical praise, and is among the top must-read books of 2020, according to the Washington Post, Symmetry Magazine, and Science News.

One could describe Galileo Galilei as a true renaissance man. He carried out experiments that led to “the very first mathematical laws in mechanics,” as Livio describes it, had transformative discoveries, studied drawing professionally, and wrote essays on poetry. He made his own telescopes to observe the surface of the Moon, discovered the four moons of Jupiter, detected Neptune for the first time in 1612, figured out the phases of Venus, and observed the Milky Way galaxy. Galileo understood the play between light and shadows, and his illustrations of the moon were among the most detailed in their ability to convey its rugged surface.

Galileo was known for rebelling against the views of his time. He once wrote sarcastically, “that the same God who has given us our senses, reason, and intelligence wished us to abandon their use.” Livio suggests it was likely these bold statements that put him on a collision course with the catholic church.

Galileo famously stood trial for his insistence—based on astronomical observations through his telescopes—that the Copernican model of the Solar System was correct. The Earth revolved around the Sun, not the other way around, contrary to the Catholic Church’s teachings at the time.

The history of Galileo is questionable, according to Livio. His trial was not as glorious or crowded as most historical paintings have depicted. At his trial in 1633, there were in fact, few people, just a prosecutor, someone to take the notes, and someone to ask the questions.

The notion that he muttered in defiance, “and yet it moves..” or “E pur si muove” in Italian, after being forced to recant his claims that the Earth moves around the Sun. Livio argues is most likely not true. However, there is no doubt that Galileo thought that way. 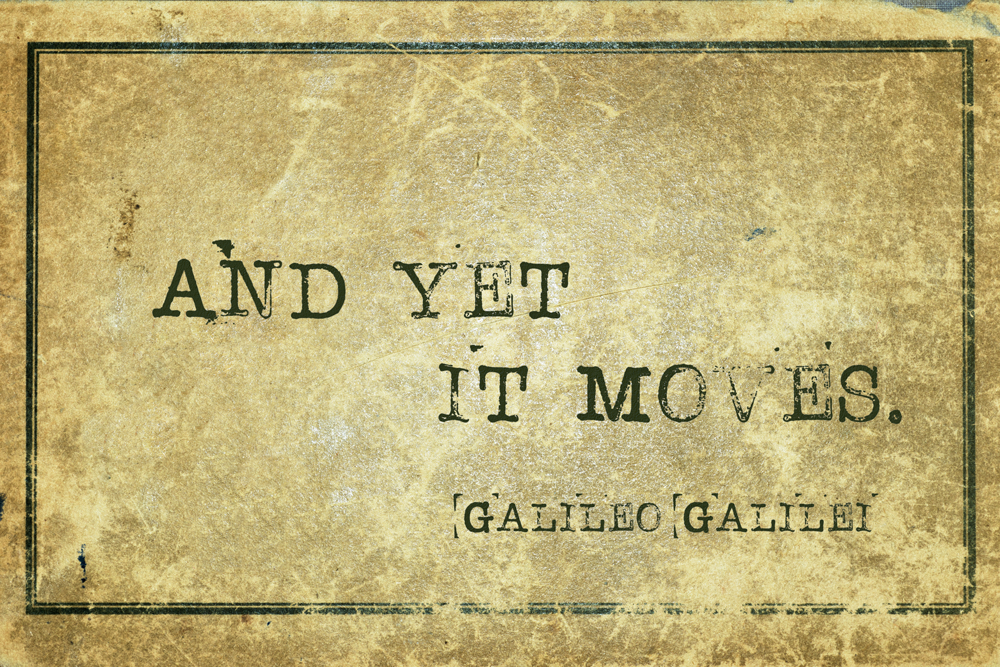 Galileo was found vehemently suspect of heresy, a serious crime and spent the rest of his life under house arrest. It took more than 300 years for the Church to admit that Galileo was right and to clear his name of heresy.

In his book, Livio talks about today’s science deniers. A short example he gives us at the end of his talk is a graph of very exact measurements of carbon dioxide concentration in the atmosphere in the past one million years. He leaves it up to us to make our minds about whether climate change is happening or not.

He adds, “Galileo trusted in experiments, observations, and reasoning based on data from those.”

“It is generally not wise to bet against the judgement of science. Whether it’s climate change, a pandemic, the fate of life on our planet is at stake,” explains Livio. When asked if he has future plans to write more specifically about today’s science deniers, Livio’s reply is no, but he adds he would be willing to give future talks about it.

You can watch a recording of his past talk on the Faculty of Science YouTube channel.