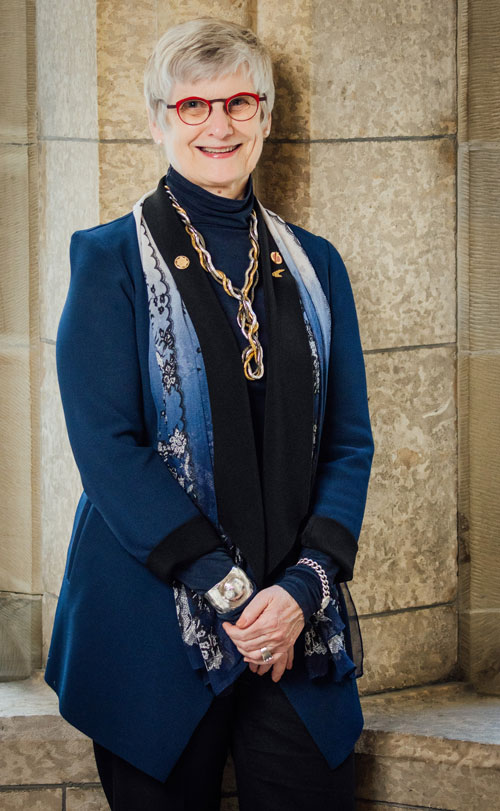 Patricia Bovey, appointed to the Senate of Canada in November 2016 representing Manitoba, is a Winnipeg-based gallery director and curator, art historian, writer, professor and, for many years, a management consultant in the arts and not-for-profit sector.

Formerly Director of the Winnipeg Art Gallery (1999-2004) and the Art Gallery of Greater Victoria (1980-1999), she was appointed Director Emerita of the Winnipeg Art Gallery in 2014. She was a founder of the Buhler Gallery at St Boniface Hospital; the University of Winnipeg’s Manitoba Arts and Culture Management Program, and MA in Curatorial Practice; the British Columbia Government House Foundation and the National Fundraising Society (NSFRE) Vancouver Island Chapter. Director/Curator of the Buhler Gallery from its 2007 inception to Dec 2016, she is Adjunct Professor of Art History at the University of Winnipeg, and from 1995-1997 was Adjunct Professor in the School of Public Administration at the University of Victoria. She writes and lectures widely on Western Canadian art.

Former Chair of the Board of Governors of the University of Manitoba, she has served on the Boards of the National Gallery of Canada (2005 – 2009) and the Canada Council for the Arts (1990-1993); the 1986 Withrow/Richard Federal Task Force on National and Regional Museums; the National Board for the Canadian Center for Cultural Management at the University of Waterloo (2002-2010); is a past Chair of the Board of Governors of Emily Carr University and of the Canadian Art Museum Directors Organization. She was a member of the Public Art Committee of the City of Winnipeg (2003-2007), and of the Mayor’s Task Force on Public Art to develop Winnipeg’s Public Art Policy (2002-2003). Former member of the Board of the University of Manitoba Press, she presently serves on the Eckhardt-Gramatté Foundation. She served as Board Chair of the Centre for Contemporary Canadian Art, and was a member of the Pierre Elliott Trudeau Foundation; the Manitoba Rhodes Scholarship and Loran Scholarship Selection committees; the board of Manitoba Artists in Healthcare and the Manitoba Chamber Orchestra.

The recipient of the 2015 Winnipeg Arts Council Investors Making a Difference Award, Bovey’s honours include her appointment as Fellow of the UK’s Royal Society for the Arts, and as Fellow of the Canadian Museums Association; the Canada 125 Medal; the Queen’s Golden Jubilee Medal; Winnipeg’s 2002 Woman of Distinction for the Arts; the Canadian Museums Association Distinguished Service Award; the Royal Canadian Academy of Arts Medal; and the 2013 Association of Manitoba Museum’s inaugural Award of Merit.