The Swedish Academy of Sciences announced today that a UM graduate, acclaimed cosmologist Dr. James Peebles, has won the 2019 Nobel Prize in Physics.

Dr. Peebles, 84, professor emeritus at Princeton University, was cited for “theoretical discoveries in physical cosmology,” and shares the award with two Swiss astronomers, Michel Mayor, 77, and Didier Queloz, 53, who discovered a planet orbiting a binary star.

Dr. Peebles is recognized as one of the most highly regarded cosmologists, and will receive one half of the 9-million kronor ($1.21 million) cash award.

“My heartiest congratulations to Dr. Peebles. We are pleased that he received his founding education at the University of Manitoba, where undergraduate students are exposed to research early in their studies,” said Dr. Digvir Jayas, Vice-President (Research and International) and Distinguished Professor. “The teaching of our professors is informed by their research, just as that teaching interaction with students contributes to their research.”

Dr. Peebles was born in Winnipeg in 1935. He graduated as class valedictorian from Glenlawn Collegiate in l953, then went to the University of Manitoba and studied honours physics, where he received a bachelor of science degree with honours in 1958. 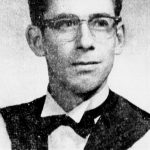 He then left Manitoba for Princeton and earned his doctoral degree from Princeton in 1962. He was made professor of physics there in 1972 and in 1984 was given the title Albert Einstein Professor of Science. In 1989 Dr. Peebles was awarded an honorary degree from the University of Manitoba, and in 2017 he was invested into the Order of Manitoba.

Dr. Peebles first achieved recognition by predicting, with a colleague, that evidence for the big bang should still be observable, in the form of cosmic microwave background radiation. But Dr. Peebles’ major life work was on the clustering of galaxies in space. He learned how to extract information on clustering from catalogues of galaxy positions and showed how to use this information to test theories of galactic formation.

Dr. Peebles’ landmark book, The Large-Scale Structure of the Universe, is practically a bible to astronomers and cosmologists trying to unravel other mysteries of the universe.

In 2015 Dr. Peebles described his physics journey for UM Today.

In 2013, UM alumnus Scott Cairns [BSc/01] shared in a Nobel Peace Prize through his work as a field officer for the United Nations’ Organization for the Prohibition of Chemical Weapons. And in 2017, alumnus Michael Landry [PhD/00] shared the Nobel Prize in Physics for his work leading a team that observed gravitational waves, a phenomenon first predicted by Albert Einstein 100 years ago.