Science education at the University of Manitoba does not only originate 50 years ago, it dates back over 116 years at the first western university in Canada. Following the completion of the new University of Manitoba building in 1901, G. Bryce, E. Kenrick, and Laird were all appointed as the first lecturers at the infant university. All with half-time appointments and annual salaries of $1,000 (~$30,000 in 2019) and were to hold their appointments until the first appointments of full time professors were hired.

George Bryce spearheaded the task of finding adequate funding for the hiring of the new professors  and contacted Lord Strathcona, the then High Commissioner for Canada. Lord Strathcona was a well known wealthy financier who was responsible for the construction of the Canadian Pacific Railway. Strathcona agreed to fund the University of Manitoba. He provided $20,000 at a rate of $5,000 per year for the following four years. On April 7, 1904, University Council voted to hire 6 full time professors at annual salaries of $2,500. With only $5,000 a year of funding allocated by Bryce, how was the university able to full pay the other four professors? The three half time instructors’ contracts were discontinued and income from university lands provided enough funds. 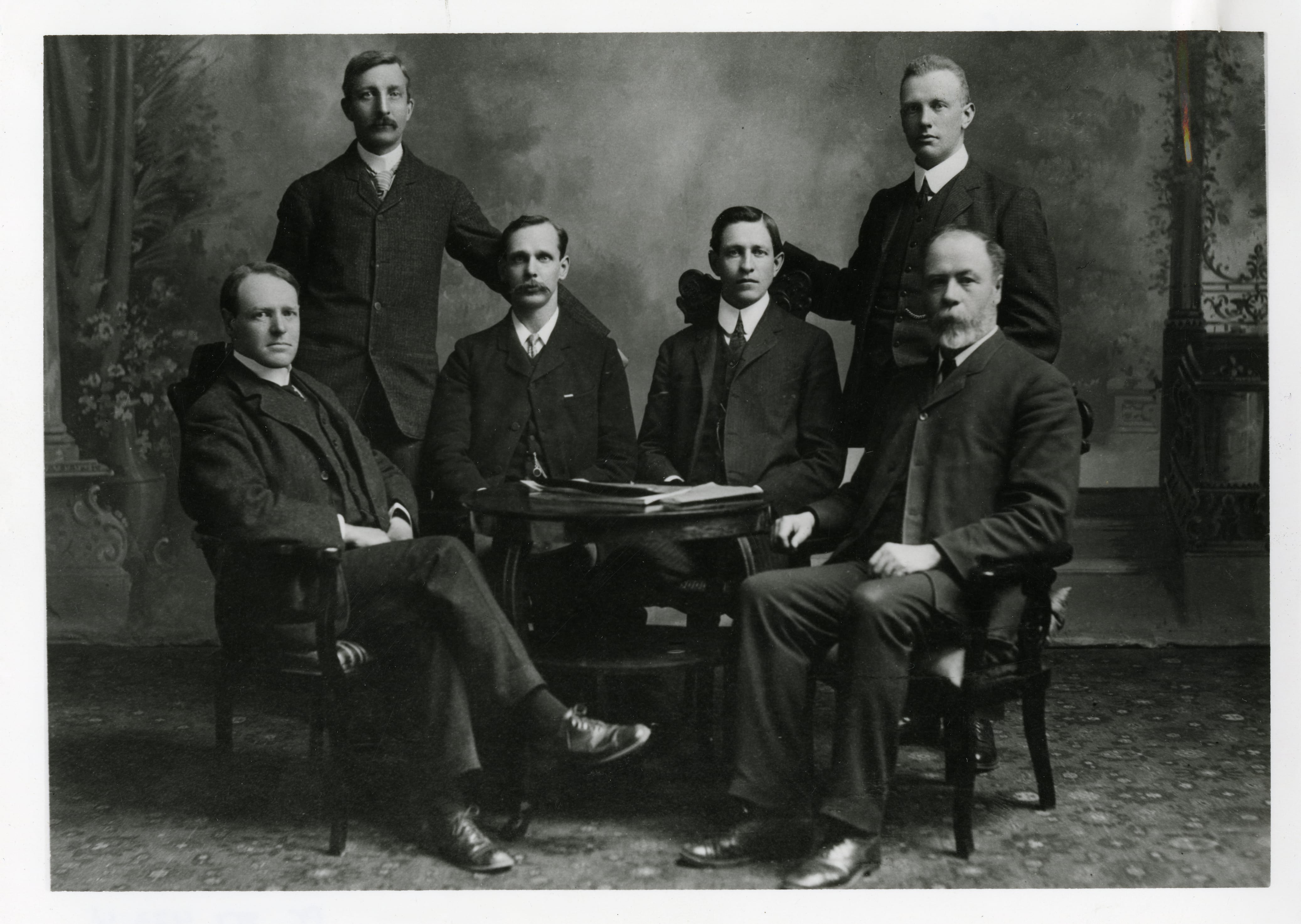 The six professors, all educated in various disciplines, arrived at the University of Manitoba in Winnipeg on October 1, 1904 to begin the next phase in science education in Manitoba.

Professor Matthew Archibald Parker was born in Glasgow, Scotland in 1871. A chemist by trade, Parker graduated with an undergraduate degree from the University of Glasgow in 1894. Following graduation, he made the move to the Royal Technical College where he accepted a position as an assistant lecturer in organic chemistry and held this appointment for the following 7 years. He later departed from the technical college and spent a year in Germany doing post-graduate work at the University of Heidelberg under the direction of Victor Meyer, but did not earn his Doctor of Philosophy. After he left the University of Heidelberg, he returned back to his alma mater, the University of Glasgow where he was an Assistant lecture. He left for Winnipeg in 1904 after marrying Margaret Blackie. He arrived at the University of Manitoba as the first formally trained Professor of Chemistry. Much to Parker’s dismay, upon his arrival, he noticed that he had no teaching laboratory facilities. The only facilities that were available were to eight third and fourth year students. Within the next two years, he installed benches in the basement of the Science Building, which opened up the opportunities to expand chemical education to final-year medical students and second year arts students.

1905 was another big year for Science in Manitoba. That year, the Scientific Club of Winnipeg was formed and was strongly supported by Prof. Parker. Although Parker did not do much research of his own, he was a devoted educator. When the opportunity arose to expand the department, Parker would hire research chemists. He also hired demonstrators from the previous year’s graduating class, which allowed them the opportunity to conduct research. A student in Parker’s early days said that at the beginning of every lecture, Parker would always say “You will remember” before continuing the material from the class before. Parker retired after 33 years at the University of Manitoba in 1937 and passed away in 1953 at the age of 82. Matthew Parker’s legacy is preserved at the Fort Gary Campus with the Parker Chemistry Building named in his honour.

The next of the professors,  Dr. Gordon Bell. Was born in Pembroke, ON, on May 22, 1863 to parents John and Mary Ann Bell. As a young boy, he attended Pembroke Collegiate, and later the University of Toronto for his Bachelor of Arts. Following a move to Winnipeg, he received his Medical Doctorate at the Manitoba Medical College (now College of Medicine). In 1890 he was appointed as the medical superintendent of the Brandon Hospital for the Insane and stayed there for 3 years. By 1896, the Office of the Provincial Bacteriologist was erected and he was named head of this department. With an already established and successful career, he married Grace MacEwan and had two children. By 1904, he was appointed as Professor of Bacteriology at the University of Manitoba. Although his time here is the “Faculty of Science” was much shorter than his colleagues. He left for the Manitoba Medical College in 1911 where the Department of Bacteriology remained exclusively and he held the position as head until his death in 1923.

At his death, colleague and superintendent of the Winnipeg General Hospital, Dr. G.F. Stephens said:

” Dr. Bell has been for many years a member of the consulting staff of the General Hospital and rarely a day passed that he was not called into consultation over some obscure case. This he always and willingly did, through his love for humanity and his profession, and not for any financial consideration. He was unique in this country in his broad knowledge of various branches of medicine and he so directed his vast knowledge to new development that he was almost an institution rather than an individual. Yet through it all his simplicity of demeanor and kindly disposition made him the best loved member of the medical fraternity in the western country. He is gone but his influence will carry on. The General Hospital has lost an old and true friend.”

Dr. Frank Allen was born on February 6, 1874 in Meduick, New Brunswick. He graduated from the University of New Brunswick in 1895 with his Bachelor of Arts degree where he received the Alumni Gold Medal. Five years later he received his Master of Arts (1900) followed by his Doctor of Philosophy in 1902, both from Cornell University in Ithaca, New York. Following graduation, Dr. Allen taught high school for the next two years. When the call for trained scientists went out for the University of Manitoba, Allen sought interest, and was later appointed as Professor of Physics and Crystallography in 1904. Throughout his long and distinguished career in physical scientists, he received numerous awards and honours ranging from honorary degrees in 1924 and 1945, Fellow of the Royal Society of Canada, and H.N. Tony Gold Medal for scientific research in 1944. Throughout a career in education, his research in physics went nothing but unnoticed. He is responsible for the publication of over 300 research papers, with one of his more well known publications “The Universe from Crystal Spheres to Relativity” in 1931. Allen retired in 1944 but remained active with the university until his death in 1965. He was honoured in 1961 with the naming of the Allen Physics Building and later participated in the opening of the Cyclotron Laboratory in 1965, months prior to his passing.

The oldest of the professors, Dr. Robert Rutherford Cochrane was born on August 9, 1850 in the Sullivan Township, Country of Grey, Ontario to immigrant parents of Northern Ireland. As a young man, he tough school various institution until he landed at the University of Toronto in 1879 to study first class honours mathematics and physics. In 1886 he was appointed as the Principal of the Collegiate Institute in Leith, ON. By 1888, he was recruited as part of the foundation of Wesley College in Winnipeg for the position of Professor of Mathematics. Two days following his arrival, he opened the institution. He married Eva Rosetta Rielly on April 6, 1891, and was finally appointed as the first Professor of Mathematics in the Faculty of Science in 1904 at the University of Manitoba. He held this position until his death in 1910.

Dr. Thomas Swale Vincent was born on May 24, 1868 in Birmingham, England to Methodist schoolteachers. He received his Doctor of Medicine from Mason College. Under the instruction of Dr. Albrecht Kossel (1910 Nobel Prize in Physiology or Medicine), he studied physiological chemistry, which led him to accept the posting as demonstrator of physiology in Birmingham. Prior to his arrival to the University of Manitoba in 1904, he held various lectureship positions at University College, London, University of Cardiff, and the University of Edinburgh. Upon his arrival and acceptance of the position of Professor of Physiology and Zoology, he made advances in the study and research of ductless glands (now known as endocrine glands). Physiology and Zoology remained under the purview of the Faculty of Science until 1920 when it was transferred over to the Manitoba Medical College. It was in 1920 that Vincent left Winnipeg, and returned to Europe where he took a professorship at the University of London. Dr. T. Swale Vincent died on December 31, 1933 in St. Albans, England.

Last but not least, Dr. Arthur Henry Reginald Buller was born on August 19, 1874 in Birmingham, United Kingdom. As a young boy, his love of science originated back to his time at Queen’s College Taunton. He later transitioned to Mason College where he completed his undergraduate course work in botany, graduating from the affiliate University of London in 1896. He then received his PhD in 1899 under Dr. Wilhelm Pfeffer, completing his dissertation titled: “Die Wirkung von Bakterien auf tote Zellen”. Upon his arrival in Winnipeg, in the fall of 1904, little did he know, that he was going to become one of the most well known and distinguished professors in his field and from the University of Manitoba.

Buller made science his life work. He aimed to make triumphs of his research agencies. This motivation benefited him greatly as his interest in wheat rust increased and let him to the foundation of the Dominion Rust Research Laboratory to be established in Winnipeg rather than Ottawa. Dr. Buller was never married but was very supportive of women entering into scientific fields and became a teacher and mentor to successful female scientists and educators. He resided in hotel rooms in Winnipeg while he was teaching and researching and spent his off time back home in the United Kingdom. Buller retired in 1936 and later died in Winnipeg in 1944 at the age of 69.

A detailed and interesting history of Dr. Reginald Buller, titled “Reginald Buller: The Poet-Scientist of Mushroom City” written by Dr. L. Gordon Goldsborough, an Associate Professor of Biological Sciences at the University of Manitoba, is available here.

“He was one of the world’s leading authorities on fungi, of which wheat rust is one, and was the author of what is perhaps the most exhaustive report on the subject over to be put in print. Published in six huge volumes over a period of 1909 and 1934, the work was the classic of his library which on the subject of fungi was said to be one of the most complete in the world.”