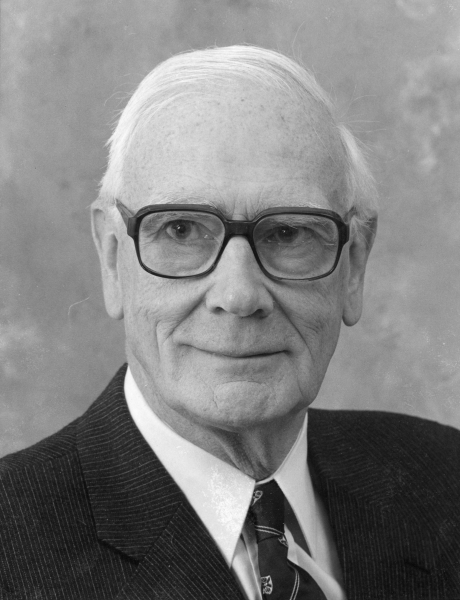 Robert Dickson Connor was the first of three children born in Edinburgh, Scotland in May of 1922 to parents, Robert and Jane Connor. Following the death of his father when Robin was only 10 years old, he attended Heriot’s School in Edinburgh.

“This disaster has a silver lining in that Robin was then admitted as a foundationer to Heriot’s School in accordance to the will of George Heriot (d. 1624), goldsmith and banker to King James VI and I would had founded the school for fatherless boys in the city.” – The Expanding World of Physics in Manitoba, 2004

After accepting an Assistant Professorship in the Department of Physics at the University of Manitoba, he, his wife, and two children (David and Graham) moved to Winnipeg, Manitoba in 1957. In 1960 he was promoted to full professor of physics and only three years later he was appointed to Associate Dean of Science in the Faculty of Arts and Science. Years later, making history, Dr. Connor was appointed as the first Dean of Science in the newly formed, Faculty of Science at the University of Manitoba. He remained in this role until 1979 when we stepped down and went on leave in Scotland. Following his return to Winnipeg, he spent several years teaching science in the Faculty of Education, then later returned to the Faculty of Science as Dean Emeritus. Following the death of his wife Sheila in 1982 and retirement in 1988, he and his new wife Sylvia spent the remainder of his retirement travelling, writing and spending time with family.

Not only was Dr. Connor an accomplished administrator, he was an active research and Principle Investigator throughout his career. He was responsible for the supervision of 9 M.Sc. theses and 4 Ph.D. theses, and belonged to the graduate committees of numerous students in education and religion. His research accomplishment in the fields of nuclear spectroscopy and mensuration produced over 45 published papers and author of various scientific and historical books.

His legacy continues as you walk down the halls of the Faculty of Science, remembering and reflecting on how this great institution has come to be and continues to grow.

The Robin Connor Lectures are biannual lectures named in honour of Dr. Robin Connor, Dean Emeritus of the Faculty of Science. Dr. Connor was the founding Dean of the Faculty of Science, and served in that capacity from 1970-1979. He had a special interest in the science of measurement and the interaction of scientific with theological thought. The Robin Connor Lectureship in the History and Philosophy of Science is designed to stimulate awareness in and bring together those who have an interest in interpreting science in its broadest terms.”

Stay tuned for more information about the 2020 lecture!

The Robin Connor Lectureship in the History and Philosophy of Science is designed to stimulate awareness in and bring together thoes who have an interest in interpreting science in its broadest terms. This includes not only physics, biological, medical and engineering aspects of science, but religious, anthropological, archaeological and psychological.

The Robin Connor Lectureship will enrich academic life at the University of Manitoba by supporting visits by international scholars who have made outstanding contributions to the study of the history and philosophy of science. This endeavor will, by virtue of the broad subject area it wishes to address, be very flexible. Visiting scholars are encouraged to interact with staff and students in addition to lecturing.

Visitors for this lecture series are chosen and hosted by a committee chosen by the Dean of Science in consultation with the Dean of Arts.

Click the link below to donate to The Robin Connor Lectureship Fund!